2021 A to Z Challenge and Wordless Wednesday!

A unique slide between the Redwoods!
Our good friends loved exploring the
The National Sequoia Park!
and now.....onto today's soup! 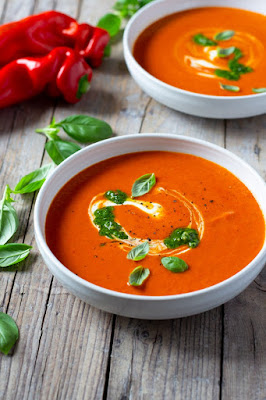 Roasted Red Pepper Soup
A rich and intensely flavored Roasted Red Pepper Soup made with sweet, charred red peppers, garlic, sun dried tomatoes for an extra flavor kick and topped with  homemade basil pesto and a creme fraiche swirl. Warm, comforting and easy!
Ingredients:
▢6 red bell or pointed peppers (1.6 lbs/750g (around 6 peppers)
▢1 yellow onion
▢5 sun dried tomatoes jarred
▢4 garlic cloves peeled and whole
▢1 squeeze lemon juice (around ½ tbsp)
▢2.5 cups vegetable stock (600ml)
▢salt and pepper to season
▢1 tbsp olive oil
▢1-2 tbsp homemade pesto( or store bought)
▢creme fraiche for topping
Instructions: Pre-heat the oven to 200°C (400°F).
Roughly chop the red peppers and place in a large baking tray with peeled whole garlic cloves. Drizzle with olive oil and sprinkle with salt and pepper then roast in the oven until slightly charred (around 40 minutes).
Finely chop a white (yellow) onion and saute in a large pot with a little olive oil until translucent and soft. Once soft, add the roasted peppers and garlic, sun dried tomatoes and vegetable stock.
Simmer for 10 minutes then turn off the heat and blend until completely smooth using an immersion blender. Taste for seasoning, I only add pepper because there's enough saltiness from the stock and sun dried tomatoes and pre seasoned peppers.
Add a small splash of freshly squeezed lemon juice, stir and serve with a drizzle of creme fraiche and homemade pesto. Grab a hunk of crusty bread and dive in.
Additional advice: Make sure you have a large enough baking tray so the peppers aren't too crowded. They tend to stew instead of roasting and charring if they aren't spread out evenly.
If you don't have an immersion blender you can use a normal stand blender, just pour or ladle it in from the pot.
You could add red pepper flakes to add a kick of spice
Once cooled you can store this soup in the fridge (minus the pesto and creme fraiche) for 1-2 days or freeze in suitable containers for up to 3 months.
Like most soups and stews this soup is even more delicious the next day. Enjoy your slurp....uh I mean soup!
Posted by Kathe W. at 2:47 PM
Labels: 2021 A to Z challenge, California, https://www.nps.gov/seki/index.htm, National Sequoia Park, R is for Roasted Red Pepper Soup!, Sandee Clark, wordless Wednesday