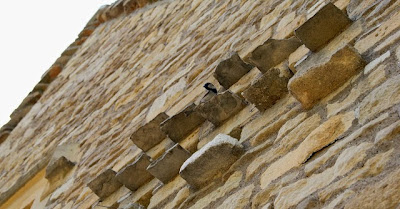 
There once was a Scot named Rick
Who was a master at laying brick
He began using clinkers
Saying "I'm not a stinker,
I'm just designing with a thrifty trick"
~~~~~~~~~
Each week Eric Alder posts one of his photos challenging
us to create a poem, a short story or whatever based on the photo.
To see more or to play along click on this link:
http://bifocalunivision.blogspot.com/2013/12/monday-morning-photo-prompt-12213.html
And my goodness do have a great week!

~~~~~~~
Info on Clinkers:
In early brick firing kilns, the surface of the bricks that were too close to the fire changed into the volcanic textures and darker/purplish colors. They were often discarded, but around 1900, these bricks were discovered by architects to be usable, distinctive and charming in architectural detailing, adding the earthy quality favored by Arts and Crafts style designers. Modern brick-making techniques can recreate the appearance of these bricks and produce a more consistent product.
Posted by Kathe W. at 1:03 PM