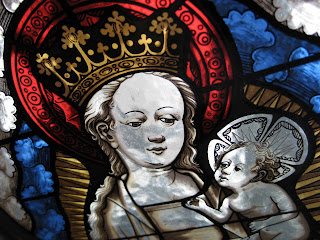 Not being the religious sort I was a bit stuck on what
I would write for this weeks Magpie Tales. But then
I thought about the new little life that had just come into
our home. A darling little kitty had been roaming our
neighborhood some days back and we were going from
door to door trying to find her family. After a few days
we realized that indeed she was a stray cat and most
likely had been abandoned. We had been catless for a
few years- resisting getting another as we figured
that at some point a cat would choose us and she did!
So rather than write about Christmas I decided I would
write about my favorite saint...Saint Francis!

On July 16, 1228, he was pronounced a saint by Pope Gregory IX. He is known as the patron saint of animals, the environment and one of the two patrons of Italy (with Catherine of Siena), and it is customary for Roman Catholic and Anglican churches to hold ceremonies blessing animals on his feast day of 4 October. It has been argued that no one in history was as dedicated as Francis to imitate the life, and carry out the work, of Christ in Christ’s own way.

And here is our darling little kitty....no name yet.
Any suggestions? She is all gray with one white spot on her chest.
I want to call her "Spot", but Russell says that is a silly name for such a beautiful cat.
*****please note that the kitty now has a name-because of her loud purr we are calling her Evy which is short for Evinrude! Thanks everyone for all your great suggestions! Merry Merry Christmas! 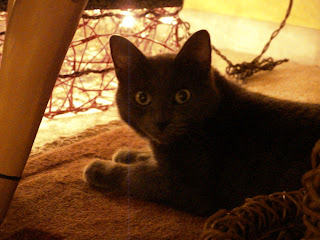