US Highway 97 begins in our little town of Weed California 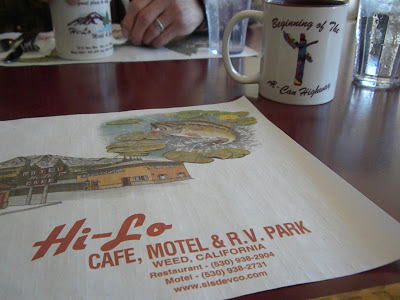 Yesterday we had a late breakfast at the local favorite restaurant
the Hi-Lo Cafe. Our breakfast was delicious and quite substantial.
We hardly needed dinner later that day.
US Highway 97 originates in Weed and heads north and connects
to the Al-Can Highway. We could drive all the way up and get
to Alaska if we thought we needed to see more snow.....hah!
Some history on Highway 97:
U.S. 97 is a major north-south U.S. highway in the Pacific Northwest, but it only has a short section in northern California. The federal route begins at Interstate 5 (Old U.S. 99) in Weed, then continuing northeasterly into Oregon near Dorris, passing through several small towns along the way. The route becomes more important as it continues north, serving the cities of Klamath Falls, Bend, Madras, and Biggs in Oregon and Yakima and Wenatchee in Washington. In the 1950s, plans called for U.S. 97 to be commissioned in Alaska at the northern end of the Alaska Highway if the Canadian territory of Yukon decided to renumber its section of Alaska Highway as Yukon 97. The territory refused to do this, so U.S. 97 was never extended into Alaska. Nevertheless, in California, U.S. 97 remains a relatively minor route even though it is one of the survivors of the 1964 California U.S. Highway Purge. U.S. 97 did not have its routing altered in that tumultuous year (another similarly unaltered route is U.S. 95, while U.S. 199 was removed from Crescent City and its overlap with U.S. 101 eliminated). U.S. 6, 50, 101, and 395 were each curtailed to some degree as a result of the 1964 legislation, but they retained at some (or most) of their mileage in the Golden State.