A Story of Childhood and Parenting 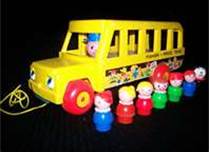 Pyromania
Growing up with three brothers introduced me to
the perils of boys with matches.
One brother who shall remain nameless almost burned our house down.
So.....years later when I had two young sons and discovered the
youngest (who was about 3 years old at the time) playing with matches
I immediately sat down with him and explained the dangers of fire.
I thought I had made it very clear and I put the matches up very high.
A few days later my monkey son managed to climb up very high to get
to the matches and I caught him once again playing with matches.
"Holy smokes- how am I going to get him to not do this?"
I asked him what his favorite toy was and he told me it was
the Fischer Price School Bus.
I told him to bring it downstairs to the living room.
I prepared a fire in the fireplace and told him that since he
thought it was fun to play with fire I would show him exactly
how awful fire can be. I then told him to put the bus in the fireplace
and handed him the matches and told him to light the fire.
Right at that very moment his older brother came home from school
and said "My Bus!!!"
The fire was never lit and my 3 year old never to my knowledge
ever again played with fire.  As I write this I wonder was I an awful
mother or just a very frightened single mom?
~~~~~~~~