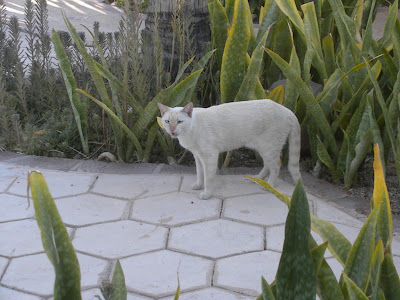 While we were in Loreto for the past two weeks there were a few pretty darn skittish cats hanging out at the place we
were staying. They were obviously hungry and so I went up to the local grocery store and got some excellent organic non-grain cat food. I was especially concerned about the cat I named Clementina. She was quite skinny and her left rear leg had something wrong as she limped quite a bit. I softly talked to her and kept my distance as I would fill a bowl of water and also a plate of the cat food on our front porch. I would then go back in our room and sure enough she would scarf that food down and drink lots of the water. Of course other cats and one neighbor dog would attempt to eat her food, but I would shoo them away until she had eaten her fill. Then I'd refill the plate for the others, even though they had owners who were feeding them.
By the end of our two weeks Clementina had filled out and her limp was not as bad as before. I passed on her food to one of the receptionists and she assured me that Clementina would be well taken care of as the cat had decided the Reception office was her new home! If we did not have Lucy already we probably would have adopted her and brought her back home and that would have been another adventure!
Have any of you had this sort of experience while traveling?
Enjoy your Feline Friday and have a great weekend!
~~~~~
Posted by Kathe W. at 9:10 AM
Labels: Feline Friday, feral cats, Loreto Baja Sur Mexico, Mexican cats, Sandee Clark