While visiting friends in Camas,Washington
we came to a screeching halt and had to get
out of the car to see these amazing deer! 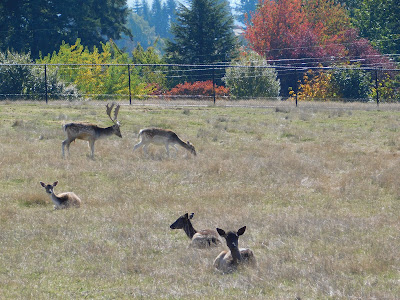 2018 Photo Project
Photo #241
They will come up to you if you have apples
or some sort of tasty bites for them. 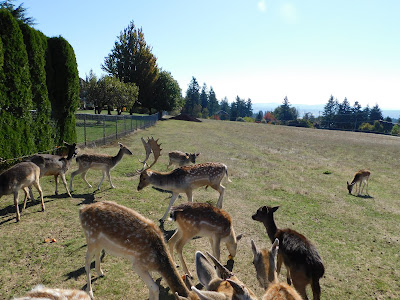 8Share
HOCKINSON — Livestock are such a common feature in rural Clark County neighborhoods that they rarely get a second glance from passers-by, but an uncommon herd at one Hockinson residence defies the norm.
In a small field behind his house, Darrell Deschand raises a herd of about 20 fallow deer. They’ve become so well known in the area, his place is referred to by many as “the deer house.”
With their petite frames and spotted coats, the casual observer might think Deschand’s backyard was a nursery of large fawns rather than home to a herd of adults. Members of this species of deer, which are not native to the Pacific Northwest, grow to be about 3 feet tall at the shoulder. Females typically reach a weight of about 110 pounds. Bucks grow to between 130 and 220 pounds.
Unlike the deer of North America, the Eurasian fallow deer can keep their white spots throughout their lives and have a color range from white to brown to black. After a few years, males begin to grow antlers that seem almost too big for their bodies and that spoon in a shape similar to those of moose.
Deschand feeds them grains when the weather is cold, but they’re just as happy to strip the leaves and bark off of tree clippings. They’ll also munch on an apple or slice of bread tossed their way by the occasional visitor that stops along the road to see them.
“They’re like a goat. They’ll eat anything,” he said.
Deschand has raised them as a hobby for more than 20 years. He said he’s always had an affinity for game animals and hunting and fishing, and he got the idea to raise them from a friend who used to raise elk in La Center.
He said there are at least four other hobby herds of fallow deer in the county. In fact, he trades animals with them and a few other nearby farms from time-to-time to keep the gene pool in his herd deep.
Although they see Deschand nearly every day, the deer are about as skittish as their wild counterparts. They’ll only allow themselves to be handled by him when they’re newborn fawns.
After that, about the only time they’ll come near Deschand is when he brings them food. Even then, when their heads are lowered to eat, they keep a watchful eye pointed at him and anything or anyone else nearby, ready to leap and bolt at the slightest disturbance.
While North American deer will leap over just about anything in front of them, Deschand’s fallow deer won’t. To help keep them in, he uses an electric fence surrounding their field.
“They’re not a jumper,” he said. “If I’ve got them cornered, they’ll run straight into the fence rather than jump over it.”
The deer attract quite a bit of attention. Deschand said small buses loaded with residents from nearby nursing homes will occasionally drop by to watch them.
“They throw bread or apples over the fence, then the deer will come up,” he said.
During one visit, the deer stayed on the opposite side of the field from where the bus was parked, too far for anyone on board to get a good look, so Deschand had the bus driver drive into the center of the field for a better look.
Although he’s had them as long as he has, Deschand says he still enjoys having the deer around and watching them.
“Especially at sundown, when they get to running and jumping and playing,” he said.
~~~~~
Posted by Kathe W. at 9:36 AM
Labels: awww mondays, Camas Washington, exotic deer, Sandee Clark