T is for Thanksgiving recipes

Brought back from my archives is the following post-
I am so far behind in my ABC recipes that I am cheating
Next week I will have U and V recipes. Hope you all had a great
family weekend-wherever you are! Cheers!
What the heck you say? What does this
alien in a car have to do with Thanksgiving recipes?
Not a gosh darn thing-but it got your attention....right?
Well- it's only October 30th, but our darling
Grace wanted several recipes
for Thanksgiving as she and Radu will be having
their first Thanksgiving in New York City!
So- Grace and Radu this blog is for you!
Love and kisses and bon appetit! 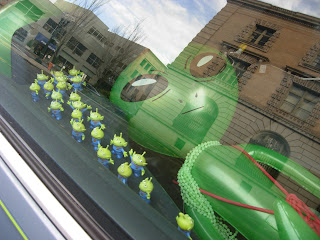 
One package dry stuffing mix with herbstwo chopped celery stalks, one med onion
one egg, some milk and a blender is handy! Pour bread cubes into a large!!! bowl add herbs
(if you couldn't find stuffing with herbs add some sage, parsley and thyme)
Add the chopped onions/celery and egg to blender. Pour about a cup of milk into the blender. This should then be poured over the dressing and mixed well with your hands.
Now you are ready to stuff the bird! Turn the turkey over and stuff the backfirst and secure it with toothpicks or metal picks. Then turn it over and stuff the front. I kind of compress the stuffing a bit with my hands to make it less messy as you stuff it. It goes in easier. After you have stuffed the front tie the legs together with some string and pop it into the oven following the directions I wrote below! If you have leftover stuffing you couldn't get into the bird- just take a oven safe container and put the stuffing in it with a bit of the stock added for moisture and cover with a lid or foil. Bake for 30 minutes
after you take the turkey out.
Keep in the fridge until you bake it.


Allow one pound of turkey per person plus a bit more if you want leftovers. So a 10 pound turkey would be a good size for 6-8 people. ( I don't think they come any smaller)
Buy fresh if at all possible, otherwise you have to thaw the turkey and that sometimes becomes problematic. Remove all the turkey parts from the inside of the turkey-
do this the day before to make sure the turkey isn't frozen inside-and check both ends as sometimes there
will be a surprise if you don't!
Put the inside parts in a pot with some roughly cut up onion and celery. Add enough water to cover and some bay leaf and thyme and sage . Bring to a boil and lower to simmer for several hours. This will be your stock for the gravy. Refrigerate this if you are doing this the day before.


Meanwhile, put the turkey on a rack breast side up
and place that in a roasting pan. At this point you will
stuff the turkey with the dressing and rub it with
a bit of olive oil, salt and pepper it and pop it into the 325 degree oven on the lowest rack for appx 15 min per pound. However, test doneness with a meat thermometer. The thickest part of the thigh should register 170 degrees and the stuffing 165 degrees. Remove the turkey from the pan to a platter, cover with foil and let rest for 20 minutes befor carving.
This gives you time to make the gravy!


Use the roasting pan that has all the browned bits as
your pan to make the gravy.
Carefully tilt the pan and skim out most of the fat.
Turn on the burner to med/med-high. Add
3-4 Tablespoons of flour to the pan and stir/scrape to incorporate all the flour into the browned bits and juices to make a roux (just like making a cream sauce for onions). Once all the flour has been incorporated add at least 3 cups of the stock you made. Stir quickly with a wisk to blend the floury bits with the stock. After a bit it will start to thicken and become gravy. Add more stock if it's too thick. Once done pour into a gravy boat or whatever is handy to use for serving the gravy.
An ordinary sauce pan with a lid works just fine!
The Ubiquitous Mashed Potato
Take as many potatoes as you need- figure one - two medium new potatoes per person, cut in quarters, put in pot of cold water to cover, boil/simmer for 20 min or until soft when pricked with fork, drain, put in 1 tablespoon butter per potato, smash with potato masher, add hot milk- just enough to smash and make the right consistency-add a bit til it seems right. That's it! I also like to put in finely chopped fresh parsley or minced green onion tops for added flavor. Surprisingly-parsley is yummy. You can also put in whole cloves of garlic in the pot with the potatoes and it will cook with the potatoes-then carefully drain so they stay in the pot after the potatoes are done and smash in with the rest. FYI I do not peel my potatoes.
Also you can use a mixer/beater to whip the potatos if you prefer. YUM 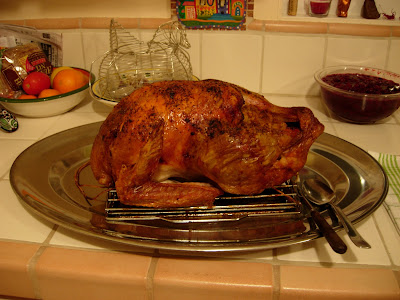 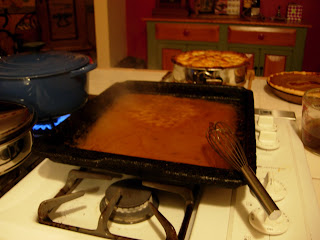 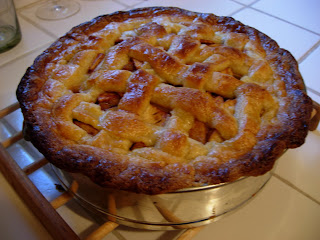 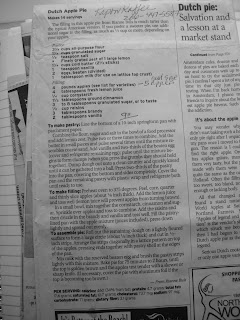 click on the photo above to enlarge so you can read it!
I use parchment paper on the bottom
and the sides of the springform pan.
That way nothing sticks! Very rich and yummy.
Happy Cooking!
Posted by Kathe W. at 11:16 AM
Labels: cranberry sauce, dressing, dutch apple pie, gravy, Thanksgiving Turkeys