A Quick Sidetrip to Morelia 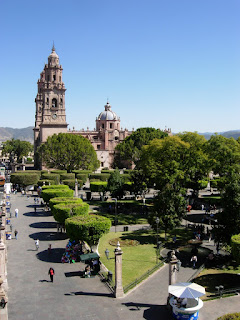 On Friday the 9th we took off early on the "directo" bus to Morelia,
the capitol city of Michoacan. It was about a 4.5 hour ride up to Morelia.
The trip was fairly scenic and after awhile I became kind of ambivalent about the
style of driving in Mexico. As one local said to me-
"I am in God's hands".....my reply was-
"Well, I hope he is helping the driver"
Morelia is a huge city full of cars and people and cathedrals on every corner.
Today, Sunday the 11th is a big election in this state for the Governor and other
government positions. There were lots of demonstrations while we were there and about 24
people were arrested in the Central Square for posting information that was false .
Or that is what I think I read in the local paper headlines.
The city felt tense, but maybe that was because no alcohol was being allowed
to be sold in restaurants, bars or stores over the election weekend.
Two days were enough to satisfy my curiousity and we are glad to be
back in Zihuatanejo...a sleepy and peaceful place.
Posted by Kathe W. at 5:24 AM
Labels: art, artisans, buses in Mexico, mexico, michoacan, morelia, politics in Mexico